Treasures can be found everywhere 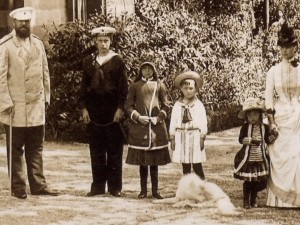 The process of cultural artifacts returning began immediately after the Second World War. However we can count on fingers stories of happy returning of values voluntarily. More often this process is voluntary-compulsory, as with domestic photos of the royal family.

These are amateur pictures taken by the Romanovs themselves. All these photos show their life which is usually hidden from curious eyes. They have a breakfast, make a picnic, fish and just have fun on these pictures.

Otto Hofman was a soldier of Wehrmacht. Before the war he was interested in art. When he was in Gatchina with other nazis, he  visited the palace. On the table he saw a pile of photos and took it to remember this place. In 1945 he was arrested and he was in Soviet captivity for some time. And when he was being set free, these photos were returned to him taken them by the the photos of his family.  When Hofman died, his widow decided to improve her financial condition and placed on auction 33 photos in Geneva. However, by chance, the representatives of our consulate saw the photos. Official protest was made. The lot was taken out of auction and negotiations with Hofman’s wife began. After that she stated her willingness to pass them to Gatchina palace.

Bureau by Gambs, a famous furniture manufacturer  from Gatchina palace was considered to be lost during the war. This furniture item was found sixty years after the war. A collector saw the bureau in Estonian province in a deserted barn of one of the houses. It was in a very bad condition.  During the restoration of the bureau, a sing of Gatchina museum was found  and the collector addressed Russian authorities with an offer to buy Gambs masterpiece for $100000. The Ministry of culture got interested in the offer and found a patron of art – David Yakobashvili. He bought the precious furniture item and passed it to the museum “Gatchina” for free.

Marble Italian vase bought by the Romanovs during the building of Pavlovsk was returned from Austria. In the pair with another similar vase it  was mentioned in the first inventory of the palace in 1790 and then in inventories of Soviet time. Museum specialists hid precious exhibits in numerous underground vaults of the palace few days before occupation. However, many items left in the palace disappeared. The vases vanished as well. They were considered to be lost when several years ago Kees  Van Der Sluijs addressed the museum to check saying that a vase with Pavlovsk inventory numbers was about to appear on the auction Hermann Historica.

They found out the following an Austrian citizen was going to put up the vase for an auction and the vase was really from Pavlovsk. After the interference of Russian Ministry of culture, the vase was taken out of auction and arrested by Munich Office of Public Prosecutor. However, its owner was declared a bona fide purchaser – he got this vase from a friend. But museum employees had information that he had bought it at the flee market.  Then specialists of the museum «Pavlovsk» began to look for a sponsor to buy this object of culture from new owner. «Sberbank» became a sponsor. The vase was bought from the Austrian for €50000 and now it's waiting for its twin.

Against all the odds, values come back, thanks to kind people. From museum funds and private collections. All objects of art should occupy their places.