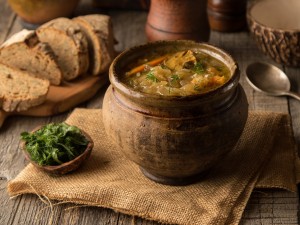 A hard-to-translate name for foreigners. Russian cuisine is often associated with this word "borsch". One might jump to the conclusion that there is nothing special about this soup. A standard set of budget-friendly vegetables. Lastly, beetroot. A classic borsch recipe is a beef cook water-based soup, prepared from the most common and affordable groceries – potatoes, carrots, onions, tomatoes, white cabbage, garlic, herbs and of course beets – although there are many versions of it.

Borsch is absent in the Western cuisine and, definitely, one should taste it while being in Russia. In spite of its seeming simplicity, borsch may become a criterion of one’s culinary abilities. They say that well prepared borsch is even able to make a marriage longer.

Shchi is a traditional Russian cabbage soup. Unlike borsch, it doesn't contain beetroot. Shchi is cooked from beef or chicken cook water greenery added. There is a cooking option called "sour shchi", which is prepared from sour cabbage. Shchi must be a bit matured, so it rests in the fridge overnight. The Russians cook rich and fasting shchi, that’s why historically people could eat this soup all the year round and it became one of the most widespread dishes.

Solyanka (a thick soup of vegetables and meat/fish)

Solyanka was first mentioned in the XVIII century. As the historian of Russian cuisine Pavel Syutkin writes, "then it is, definitely, not a soup (broth) yet, but a hot dish of cabbage, cucumbers, meat, poultry, fish, mushrooms or other items". Solyanka as the first course appeared in the 2nd half of the XIX century. It is cooked with sturgeon, capers, lemon, and smoked meats. "Every innkeeper showed their talent by means of it, attracting customers with unthinkable tastes and smells." Initially, the components of the dish were chosen randomly but it resulted in a remarkable thing: numerous ingredients provide the human body with almost all the necessary elements.

This simple peasant dish included only onions and black radish, covered with kvass and sour cream. Since the end of the XVIII century, the okroshka recipe has already included various types of fried meat or fish, salted and fresh cucumbers, salted plums and onions. In hot summer weather, this cold soup is simply irreplaceable. Okroshka allows one to cool, along with soft drinks and water treatments. It is to be noted that okroshka is a healthy dish that contains all the necessary vitamins and minerals humans need.

You can try these soups and some more in most restaurants of Saint Petersburg.

Read more about our shore tours and excursions.