Six Gems of the Hermitage Museum 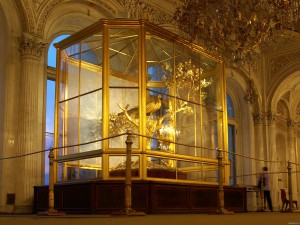 The Peacock clock is magnificent in its beauty creation of the famous London jeweler James Cox and German master Friedrich Urey. Copper, silver, gilding and rhinestones were used for its creation. It was a gift from Prince Potemkin to Empress Catherine II. The clock was assembled by a famous Russian master Kulibin because it was delivered to Russia unassembled and some of the details were missing. Unfortunately, the favorite of Catherine II Gregory Potemkin died and was unable to present his gift personally. What makes this clock unique is that it still works. Figurines of the peacock, an owl and a rooster produce various sounds and rotate. They wind up this clock every Wednesday at 8 p.m. By the way it is not that easy to find the face of the clock!

Two paintings by Leonardo da Vinci are in the Hermitage collection. These are «Madonna Litta» and «Madonna Benois»

«Madonna Benois» - another name is «Madonna and Child with Flowers» was purchased from the Benois family. It is one of the early works painted by Leonardo da Vinci in oil. Leonardo is believed to create this technique. Earlier tempera paint based on egg yolk was used - it is still used in icon painting. Madonna Litta. This painting appeared in the Hermitage collection from the Italian Litta family in the middle of the 19thcentury. The work was painted for the rulers of Milan.

The Hermitage has the best collection by this outstanding artist. «Prodigal son» is the most famous painting in front of which there are always many people. It’s better to look at this picture from afar. The second picture to pay attention to is «Danae». An ancient Greek episode in which Zeus took the form of a golden rain to visit Danae, a beautiful daughter of a Greek Tsar. The painting is known for being subjected to an act of vandalism by a Lithuanian who poured acid on it and cut twice with a knife. Despite the fact that a third of the canvas was damaged, the picture was restored and now it is behind armored glass.

4. Portrait of a Lady in Blue by Thomas Gainsborough.

The only picture of the London artist on the territory of Russia. Presumably, the model was a daughter of Admiral Boscawen Elizabeth married Beaufort. This work is one of the best of baroque epoch-the portrait of an elegant lady, the canvass charms by its beauty, smooth transitions of tones and the play of shadows. This painting appeared in the Hermitage collection in 1912.

5. Pazyryk burials. The Pazyryk culture is a culture of early Iron Age, about VI-III centuries BC. The burials were found in the Altai region with well-preserved due to the climate, mummies. Even complex tattoos on the skin were visible. Perfectly preserved figurines of animals and birds, disassembled carriage as well as the world's oldest pile carpet (presumably 5 BC) were also found.

6. Portraits of the Romanov dynasty.

The gallery is located on the 2nd floor of the Winter Palace. It contains portraits of emperors who ruled Russia since the XVII century. From the first Tsar of the dynasty Mikhail Fedorovich to Nicholas II. The collection is quite extensive and walking through the gallery, you can add to your knowledge of the history of Russia and the Romanovs in particular.