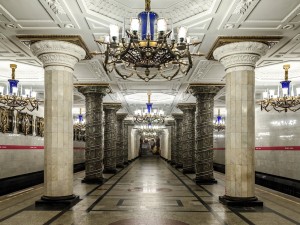 Saint Petersburg subway or metro is not only the fastest way of transportation but also absolutely amazing, extravagant and historical place. You can visit it even when you come on a cruise liner.

The idea of creating the subway in Saint Petersburg first appeared in the 19th century. In 1820, a Russian engineer Torgovanov appealed to the emperor Alexander I via Count M.A. Miloradovich with a proposal to set up a railroad tunnel under the Neva. The tsar wrote on the petition the resolution to allocate two hundred rubles from his funds to Torgovanov and make him sign a paper not to come up with such projects any more. More than a hundred years later, in 1940 the subway construction was started and on the 15th of November 1955 the first 7 stations of the red line were inaugurated.

Saint Petersburg underground is the deepest in Russia and one of the deepest in the world as it runs under rivers with the deepest station Admiralteyskaya (86 meters). It is the closest to the State Hermitage museum.

The subway was created as a giant bomb shelter. When you are at the bottom of the escalator - have a look around - you will see a metal belt which hides huge doors.

Subway construction had ideological meaning that was difficult to underestimate. «Underground palaces» is the best phrase to describe the idea. The Soviet government wanted people to feel pride for their country when going to work and home every day and that is why the best materials - natural marble and stones, mosaics, sculptures, extravagant chandeliers, everything associated with palatial style were used to decorate the stations which also referred to important Soviet events.