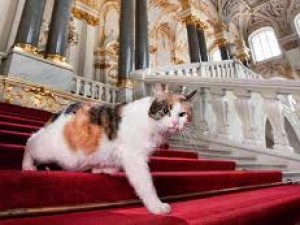 Cats are a legend of the Hermitage and part and parcel of it. You will see them on cat-themed souvenirs from the Museum, in the children's drawings exhibited in the Palace galleries on the annual Day of Hermitage Cats (for the last part of April - in early May), you will hear about them in interviews devoted to the Hermitage Museum.

The Hermitage produces books and calendars dedicated to its cats, movies are made about cats, and in 2016 the American composer Chris Brubeck created the musical "The Hermitage Cats Save the Day".  It is believed that the history of cats in the Hermitage dates back to the cat Vasily, whom Peter the Great housed in his first wooden winter Palace. Later, Elizabeth I, the daughter of Peter the Great, issued a decree on the "expulsion of cats to the court" in which she ordered "to find in Kazan...30 the best and biggest cats capable of catching mice, and send them to  the Court of her Imperial Majesty" for mice and rats intimidation. The decree was immediately executed. Almost all rodents disappeared from the Palace.

Catherine II did not like cats, but let them live in the Palace and granted the status of guards of art galleries having divided them into 2 categories-outdoor and indoor cats.   Ultimately, thoroughbreds were chosen as indoor guards.   Cats lived in the Hermitage under all emperors and under Soviet rule after the revolution.

In the course of the siege of Leningrad all cats died. Rats appeared. The halls were almost empty-the works of art were evacuated to the Urals, and there were bomb shelters in the Museum cellars. After the war's end, 5000 cats were brought to the city, some of which got into the Hermitage and the rats disappeared quickly. Now, the cats continue to serve in the Hermitage. They have freedom of movement around the Hermitage, but they are not allowed to enter the Museum halls. The cellars network itself (about twenty kilometers), where cats live and hunt, is called "big cats basement".

The cats are provided with comfortable housing conditions — it is always dry and warm in basements, all rooms are equipped with small passages for freedom of movement. Full security is provided as well. Each cat has its own bowl, tray and basket for sleeping. All of them are vaccinated, regular veterinary supervision is carried out, all animals are spayed. The cats even have their own charity account.  From time to time the animals are dumped off into the Hermitage and since there is a limit of 50 cats, the Hermitage regularly mounts campaigns to find good hands for the cats. The new owner receives a certificate "Owner of the Hermitage cat", which gives the right for lifetime free access to exhibition halls. Discover 6 gems of the Hermitage museum.