Fate of Cultural Values Stolen by Nazis during the War 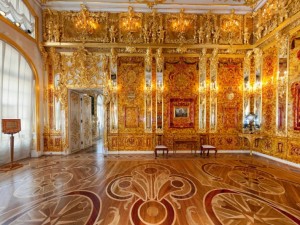 Before the war Nazi experts made a catalogue with the cultural values which, according to their ideology, corresponded to the ideas of the third Reich.

Bright example is “Neptun” - a fountain in Peterhof created by Nuremberg masters. Our specialists managed to find the fountain after the war. It was stored disassembled in the boxes in the underground hiding-place near Potsdam.

One more masterpiece by German masters is Large Gottorp globe-planetarium which was given as a diplomatic present to Peter I by the emperor Fridrich I. Now it is in the Chamber of Curiosities and before the war it was in Tsar’s village. It was stolen by Nazis and returned to Russia only in 1948.

Hitler was going to open a museum of masterpieces from all parts of the world. Other heads of the Third Reich gathered personal collections and competed in luxury. Borman competed with Kaltenbrunner, and Hering’s collection was so rich that even Hitler envied him. The Amber room is the most famous loss. In September 1941 Leningrad (Soviet name of Saint Petersburg) was encircled and the suburbs had been already occupied by the Nazis where they played the masters. Residence of Russian empress in Tsarskoe Selo (Tsar’s village) that had been majestic before, at that time was a pitiful sight. Windows were broken, the furniture was turned over, silk upholstery of the sofas was cut by Wehrmacht soldiers for foot wrapping. Hitler's forces looted the Amber panels of the Amber room and brought them to Koenigsberg (now Kaliningrad) in 27 lorries.

During the installation of the amber masterpiece in Koenigsberg castle, they came across an annoying nuisance: one of four Florentine mosaics was lost during the transportation. Exemplary German order was disturbed and mosaics was just stolen by one of the officers.  The Amber room disappeared in spring of 1945. By one version, it burned down during the bombardment of Koenigsberg, and by another version, it was hidden by the Nazis in an underground shelter. Anyway, its location is still unknown. And the unique mosaic “Sense of touch and sense of smell” was found by the Russian representatives in Europe. Initially $2500000 was the price for the mosaic from the Amber room they the Russian representatives to pay. However after the appeal of the employees of the Russian Federal Surveillance Service for Compliance with the Legislation in Mass Media and Cultural Heritage Protection, the police had to interfere. After several years of trials the mosaic was returned to Russia. And even now, 75 years after the war, there is hope that other original exhibits from the Amber room can appear here.

Not only large-scale action of stealing of the treasures but also destruction of culture took place. The Nazis purposefully destroyed Russian culture. It also concerns the house of Tolstoy in Yasnaya Polyana.

The Nazis lived in the museum like at home, used the crockery, slept where they wanted. The legendary leather sofa where many generations of Tolstoy family were born, was cut by bayonets. More than sixty objects which belonged to Russian writer disappeared. Their fate is unknown.