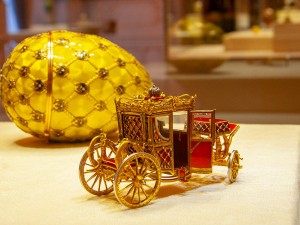 Even if Carl Fabergé had limited himself to making jewelled eggs, his name would have been on a par with the greatest jewelers. Nevertheless, House of Fabergé became the first Russian company that reached Siam, where the royal apartments of Thai monarchs were decorated with Jade Buddha crafted by its jewelers.

Peter Carl Fabergé was born in 1846 in St. Petersburg in the family of a jeweler and got a brilliant education, traveled a lot, admiring the sights and visiting the famous European museums, where he drew ideas for his own works. In Russian culture, Fabergé stands high - his works belonged to the last Romanovs literally from the cradle to the grave. The court's jeweler of two last Russian emperors, the honorary jeweler of the Paris Guild of jewelers, Carl Fabergé proposed a completely new concept of workplace management in his field of work. Being a highly skilled jeweler, rarely he got right on that himself, having entrusted exquisite workmanship to highly qualified and skilled craftsmen. The coronation egg which you can see below is one of multiple items you can see in Faberge museum if you add it to your Saint Petersburg Highlights Tour.

More than 800 people worked in the House of Fabergé. Carl Fabergé was scrupulous about artwork, carefully checked all the products and put his mark on them only when they met his requirements. Otherwise, in order not to discredit the brand, he destroyed them without any qualms and not thinking about their value.    He managed to unite many famous jewelers, set up and successfully operate business for several decades. Earlier, this work had been deemed absolutely artisanal. This "heady brew" became a kind of know-how in the second half of the XIX century and half the battle for future prosperity, as well as high-profile world fame. Carl Fabergé ran a large-scale business, was engaged in marketing and finance.

Fabergé shops were set in St. Petersburg, Moscow, Kiev, Odessa and London, where he was extremely popular with members of the British Royal family and the high-born. Tiny figures of animals with semi-precious stones, flowers of gold, precious and ornamental stones and enamels and a variety of precious haberdashery were especially popular.

Queen Alexandra had the right to be the first to choose the novelties brought from St. Petersburg, and her subjects bought up what remained.   Fabergé's items were considered the standard of good taste, elegance and high quality, and the company's interests went beyond Europe and reached the Royal court of Siam. Twice a year, the jewelers of the company went to Ceylon and India.

In 1885 Alexander III orders jeweled eggs as a gift to his wife Maria Fedorovna, neé Danish Princess Dagmar. The egg shell was made of white enamel, and the yolk of matte gold. Inside the egg, was a chicken of colored gold, and it contained a miniature Imperial crown. Two ruby egg pendants were fastened inside it. The Empress liked the Easter gift so much that it became a good tradition to present jewelled eggs with a surprise first to Empress Maria, and after the coronation - to Nicolas II and Alexandra till the October revolution of 1917.

The described event resulted in a new milestone in the career of the jeweler: continuing to supply the Royal family with amazing jeweled eggs, porcelain, crystal, silver jewelry and accessories, Karl Peter Fabergé remained the Royal court's jeweler for the next 32 years. The Imperial collection of jewelled eggs still boggles the mind - one can see a significant part of it including the first Easter gift at the Fabergé Museum in St. Petersburg. Schedule the visit beforehand if you are a cruise visitor.

In 1918 the Bolsheviks closed the House of Fabergé. Two years later, its owner moved to Lausanne, where he passed away after the lapse of few months.   For more than a century, the name Fabergé is quite familiar to the whole world, and rightly so, since during its lifetime it became a famous brand, having placed the name to the style of jewelry and souvenirs, unsurpassed in techniques and aesthetic value.