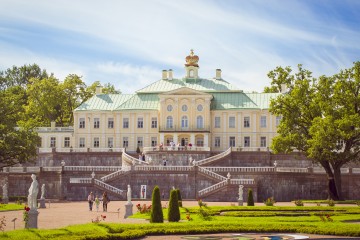 Most summer residences were seriously damaged during the Second World War and needed long restauration, but there was one, which was not captured by the Nazis. This is Oranienbaum residence.

We will visit Grand Menshikov palace and luxurious Chinese palace, see what remained of the first roller coaster in the world; you remember they were once called Russian Mountains and were designed to entertain Catherine the Great in 1784.

After that we will drive further to explore the naval city of Kronshtadt. Kronshtadt is a town-Russian naval base on an island which was founded by Peter the Great and has never been conquered by enemies. Splendid Cathedral dominates the town which is now connected to the mainland by a damb.

Contact us to get the best price using the quick form below.